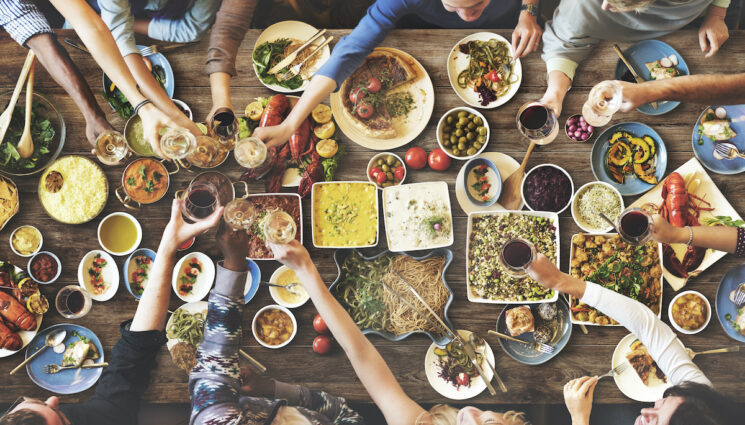 Although Greece is worldwide known as a country with rich history, mythology, and beautiful beaches, it is also home to some of the tastiest dishes and beverages. But what is the most popular food and drink in Greece? We are here to explore this subject, so we did in-depth research and came up with some of the tastiest dishes and drinks you should not miss when visiting this lovely country.

With some of the oldest recipes, Greek cuisine influenced Middle-Eastern, Italian, and Ottoman cultures, with that special set of spices and flavors. The same can be said about their drinks, as it is home to some well-known and delicious spirits you maybe heard of. So, without further delay, let us check which drinks and foods you should taste when visiting Greece. 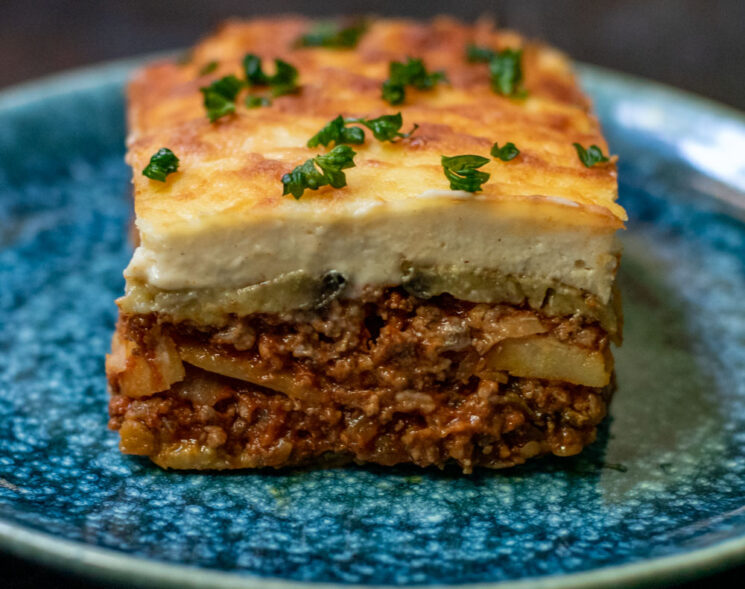 Moussaka is a traditional creamy and delicious dish made of spiced meat (usually beef or lamb). It is cooked in tomato sauce and layered with fried eggplant and bechamel sauce. It is one of the most recognizable and most popular Greek dishes. 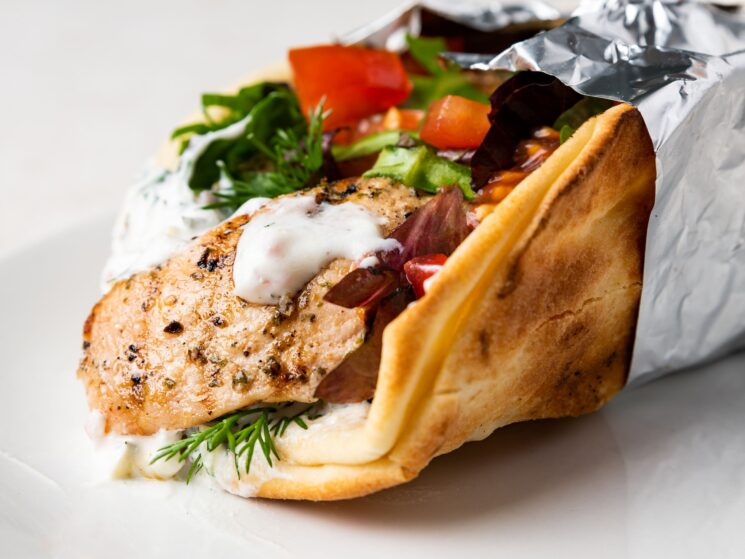 Gyros is likely one of the most popular Greek foods worldwide. It is a handheld pita sandwich that is prepared with a variety of different meats, including beef, lamb, chicken, and pork. In Greece, it is commonly served with fries and veggies packed inside a tangy tzatziki sauce on top. 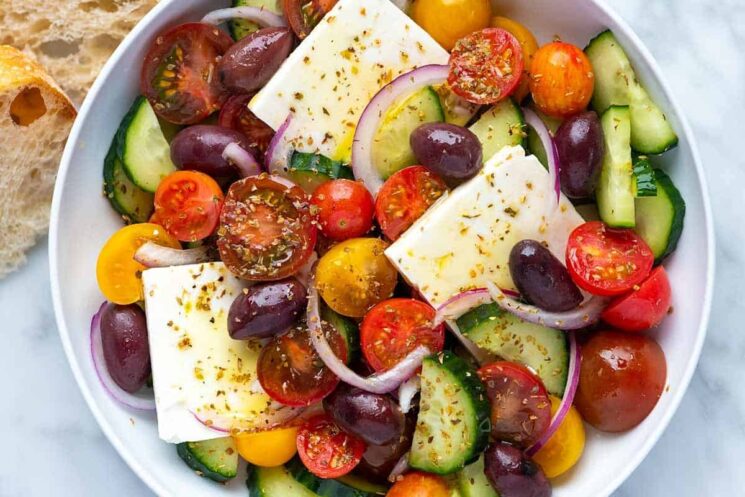 This is the salad that you have likely had more than a few times in your life, but there is something special about it when you eat it in Greece, as the spices and ingredients just taste way better than when you prepare this dish at home. It is also known as Horiatiki, and it includes tomato, cucumber, green pepper, olives, red onion, and a large brick of feta cheese on top. 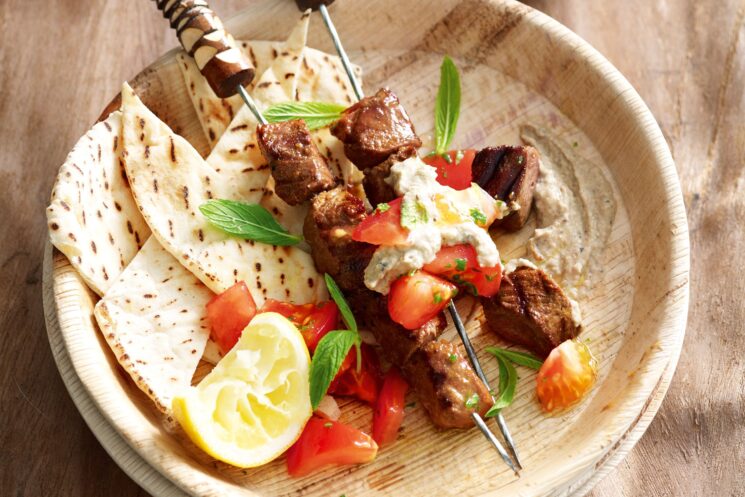 Whenever you find yourself craving some Greek-style dinner, you should definitely go for Souvlaki. The most typical version of souvlaki is lamb. You take chops of lamb marinated in lemon and olive oil to create that amazing taste. It is grilled with onions and often served with rice or pita, and Greek Salad complements the flavor even better. 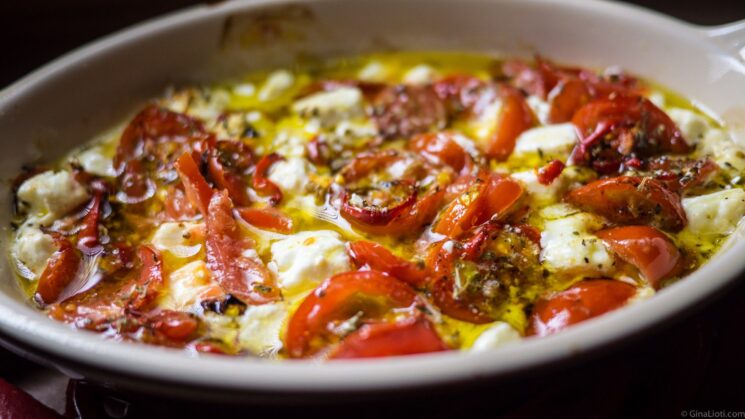 Bouyourdi is an old and traditional Greek appetizer that is served before the main course and stimulates your appetite. It is very similar to some sort of dip that is served on grilled vegetables or bread. The main ingredients are tomatoes, feta, and red chilies, which are similar to jalapenos. Aside from being an appetizer, it is great to eat on its own. 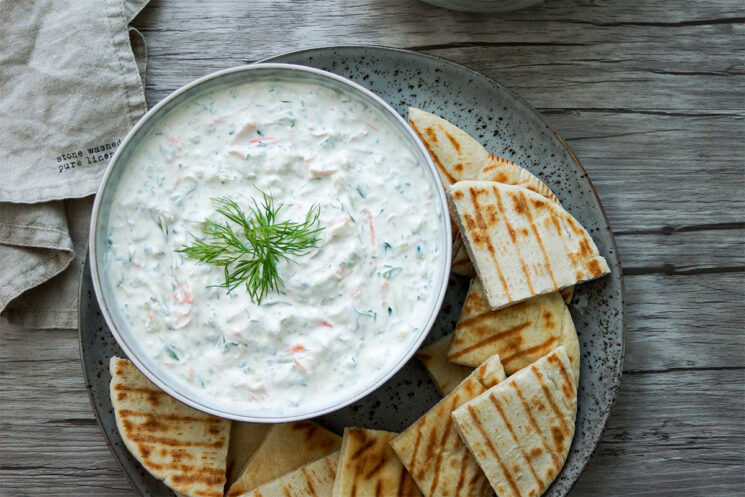 Tzatziki is a powerhouse name from the Greek kitchen, and it is a universal sauce in Greek cuisine. It is made from Greek yogurt, garlic, lemon, and dill, combined together. Afterward, these ingredients are drizzled with olive oil and dressed with olives. This sauce is the tastiest with pita or when scooped onto just about anything you like from Greek Cuisine. 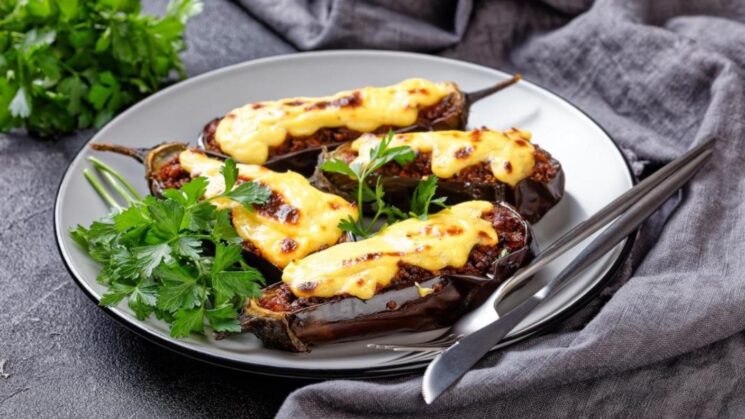 Papoutsakia is a Greek version of stuffed eggplants, and it is filled with a tomato-based meat sauce. It is topped with bechamel sauce and cheese, and for a finishing touch, you bake it until it gets that beautiful and recognizable golden color. Due to ingredients, Papoutsakia tastes similar to moussaka. 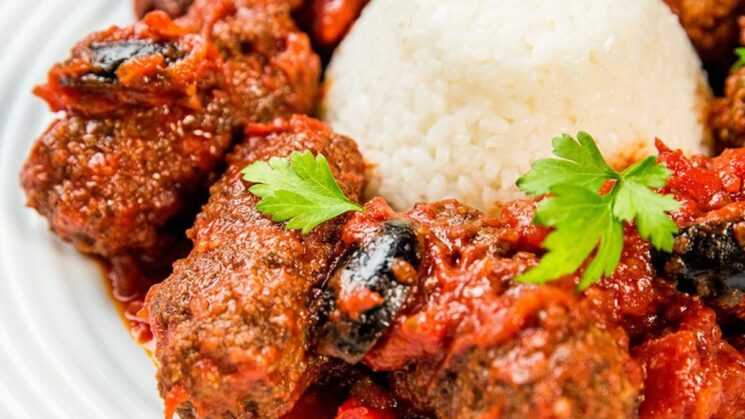 Soutzoukakia, or Greek meatballs, are made from a mixture of ground pork beef, cumin, and olive oil. The mixture is cooked in a red wine sauce that gives this dish a specific and delicious flavor. The dish is served with some rice on the side and is filling in a way that you can eat it both in summer and winter. 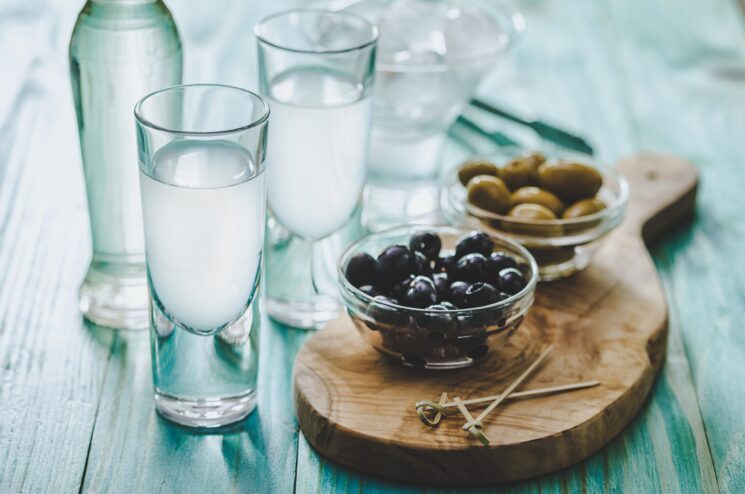 Ouzo is a dry type of aperitif made of anise flavor. It is a type of brandy that has a delicious and strong taste. Ouzo is the national drink of Greece and certainly one of the most famous drinks in the country. The drink is distilled with anise, fennel, and some other local herbs. It was first made in Tymavos in Thessaly, way back in 1856. 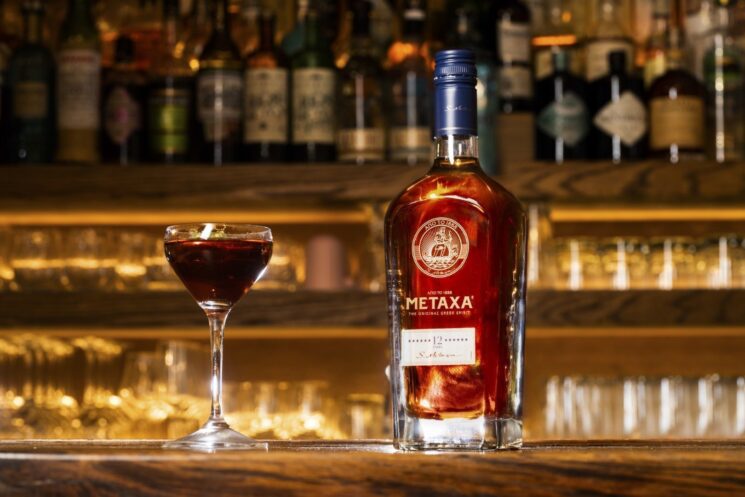 Metaxa is one of the tastiest amber spirits in the world, and it is a pride of Greek spirit manufacturers. The drink is named after Spyros Metaxas, who began distilling this famous drink back in 1888. It is a blend of wine distillates made of Muscat white wine from Samos and different Mediterranean botanicals that age in oak barrels. 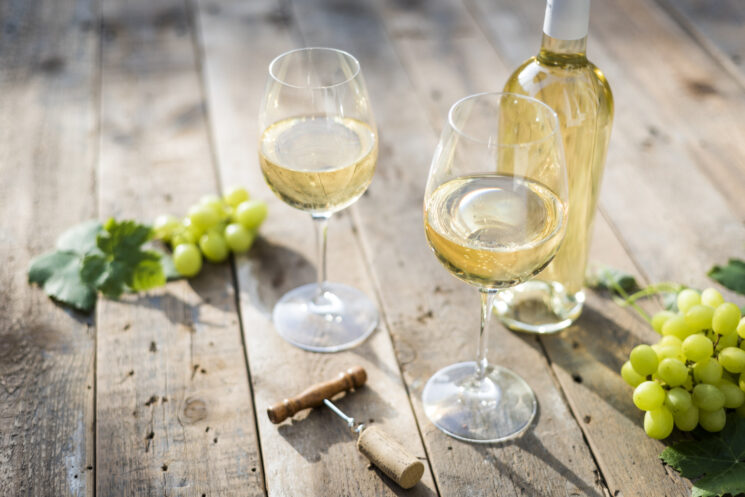 Retsina wine is one of the most popular local drinks in Greece. It is a traditional wine infused with Aleppo pine resin and has a distinct and recognizable flavor. It is a firm favorite among Greeks and tourists. Moreover, it is very popular in the budget category, so you will not have to spend a lot to taste this delicious wine. Tsipouro is a well-known spirit both outside and in Greece. It is a strong spirit related to one of the most famous drinks in Greece, Ouzo. This is a strong liquor distilled from grape skins and leftovers from the winemaking process to a 40% to 45% strong alcohol. 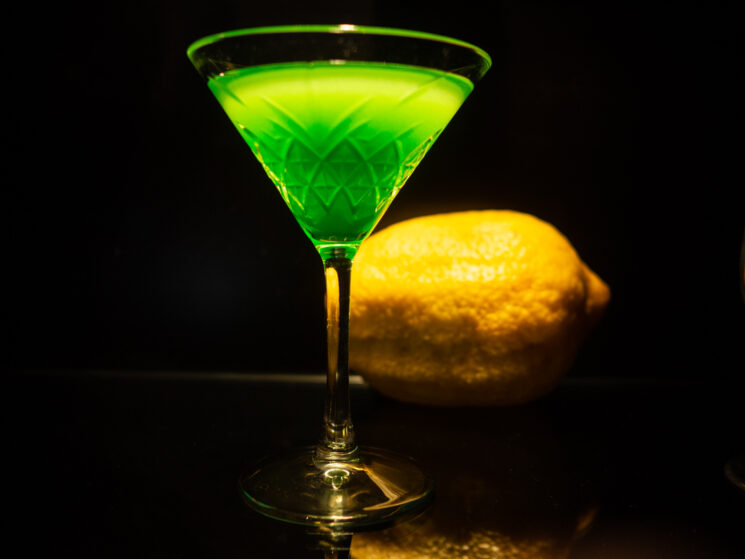 Kitron is one of three Greek liqueurs marketed with a Protected Designation of Origin, and the leaves of the citron tree are the main sources of this drink’s distinctive and delicious flavor. The citron leaves are collected in late fall or early winter and soaked in alcohol and water to extract the essential oils. Afterward, the mix is distilled up to three times, and you get this delicious product. 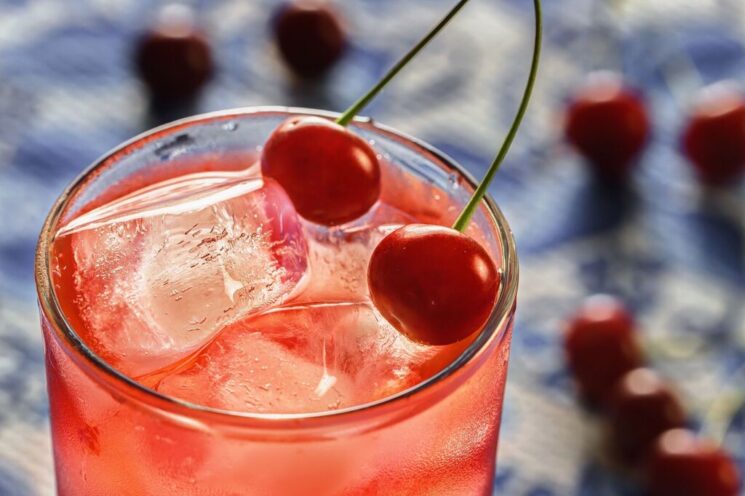 Visinada is one of the most popular non-alcoholic Greek beverages. It is a refreshing and invigorating drink since it is very rich in vitamin C. This is a beverage that is served in various forms, but if you are lucky enough to run in a real taverna, you should try traditional Greek Visinada there. Greeks usually use the wild sour cherry to make this drink, although the cultivated cherry is also widely used. Rakomelo is a well-known aperitif in Crete and is widely popular on the Greek mainland and other islands of the Aegean Sea. It contains Tsikoudia, honey, cardamom, cinnamon, or some other local herbs. Greeks traditionally used this liquor as a calming winter drink or home remedy for sore throat and cough. 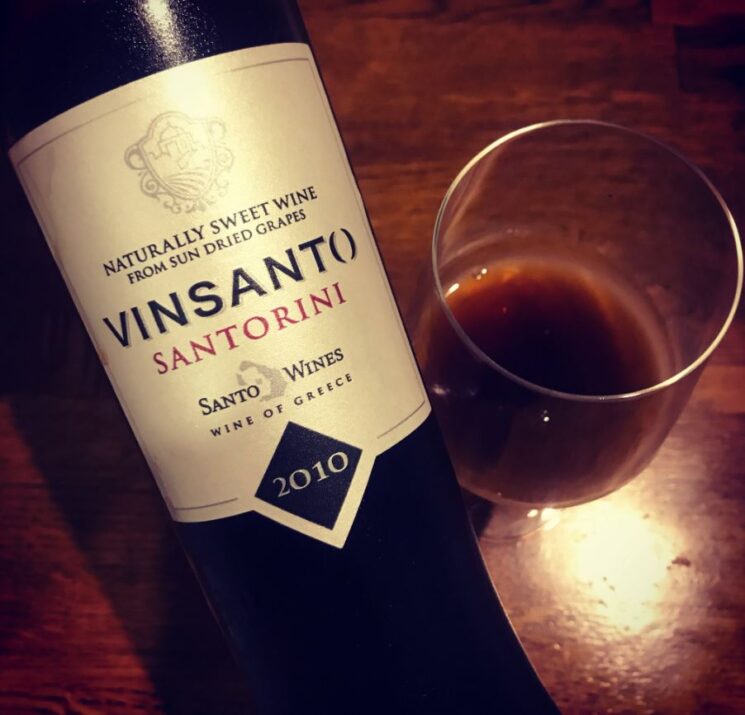 Vinsanto is a well-known dessert wine with origins in the Greek island Santorini. Makin this wine has been a tradition of the island for thousands of years, and some natives even claim that this wine represents a crucial part of Santorini’s history. It is prepared with 51% Assyrtiko grapes and 49% Aidani grapes, and it must mature in oak barrels for at least two years.

Greece has a special and rich culture worth exploring, and once you decide to indulge yourself and visit this lovely country, make sure to stop by a local restaurant and taste some of the dishes and drinks we have listed, and we guarantee you will not regret it.